Insomnia and obstructive sleep apnea commonly co-occur (COMISA). Their co-occurrence has been associated with worse cardiometabolic and mental health. However, it remains unknown if people with COMISA are at a heightened risk of incident cardiovascular events and all-cause mortality.

COMISA had higher prevalence of co-morbidities (e.g. diabetes, hypertension) than no insomnia/OSA. We observed a 2-fold increased incident cardiovascular event risk for COMISA compared to control in the unadjusted model. After adjusting for pre-specified covariates, co-morbid insomnia and sleep apnea was not significantly associated with incident cardiovascular events (hazard ratio 1.38 [0.92, 2.07]). However, after adjustment for pre-specified covariates, participants with COMISA were at 47% increased all-cause mortality risk compared to participants with no insomnia/OSA.

What were the conclusions?

This is the first study to demonstrate that people with COMISA have an increased risk of all-cause mortality, compared to people with no insomnia/OSA. People with COMISA may also be at higher risk of incident cardiovascular events, although this results requires further validation. This work would not have been possible without the incredible work from the National Sleep Research Resource to host and facilitate the access to this large dataset and the willingness of the Sleep Heart Health Study investigators to share these data. Thank you! In this blog post, we briefly summarize the main findings of our studies (citations below).

For more information, feel free to reach out to the authors: Bastien Lechat Alexander Sweetman

Insomnia and Obstructive Sleep Apnea (OSA) are the two most common sleep disorders and frequently co-occur. Co-Morbid Insomnia and Sleep Apnea (COMISA) is a highly prevalent and debilitating condition that is more difficult to treat, compared to either insomnia-alone or OSA-alone1. Approximately 40-50% of people with OSA report insomnia symptoms, and 30-40% of people with insomnia have OSA2 (Figure 1).

The co-morbidity of insomnia and sleep apnea was first described by Guilleminault and colleagues in 19733, but started to receive an increasing amount of research attention following two articles in 1999 and 2001 describing their frequent co-morbidity in larger samples (Figure 2).

Several studies have also reported cross-sectional associations between COMISA and Cardiovascular Disease (CVD)7-9. However, longitudinal studies investigating the effect of COMISA on incident CV events are scarce10. Therefore, we used the SHHS data to additionally investigate associations between COMISA with prevalent CVD, and incident CV events.

Co-morbid insomnia and OSA in the Sleep Heart Health Study

These studies used the SHHS to investigate possible associations between COMISA and prevalent cardiovascular disease, incident cardiovascular disease as well as all-cause mortality. The study design and methodology of the SHHS has been reported previously and is available on the National Sleep Research Resource. Full overnight sleep studies from 6,441 participants were pooled from different population-based studies, of which 5,804 are available through the National Sleep Research Resource (accessed in September 2019).

Obstructive sleep apnea was defined as an apnea-hypopnea index ≥ 15. Hypopneas were identified if the breathing amplitude of the thermocouple or thoracic/abdominal band signals decreased by ≥ 30% for at least 10 sec in association with ≥ 3% reduction in oxygen saturation or an arousal.

Insomnia was defined according to the presence of self-reported nocturnal symptoms (difficulties falling asleep, waking up in the middle of the night and having difficulty returning to sleep, and/or waking up too early and being unable to resume sleep, on 16-30 times per month) and daytime impairments including having little to no energy in the past 4 weeks, and/or feeling unrested at least 5 times a month and/or feeling tired most/all of the time.

Statistical modelling and methods closely followed previous report from the Sleep Heart Health Study. Logistic regression was used to investigate cardiovascular disease prevalence for each sleep disorder group. Kaplan-Meier curves and Cox-regression were used to compare all-cause mortality risk and incident cardiovascular event risk. Regression models were adjusted for covariates that may confound the association between sleep disorder and outcomes.

COMISA was associated with a 75% increase in likelihood of having cardiovascular disease at baseline after adjusting for pre-specified confounders. We observed an association between COMISA and incident cardiovascular events in the unadjusted models (see figure 3a; hazard ratio, 95% confidence interval: 2.00 [1.33, 2.99]) compared to control. However, after adjusting for pre-specified covariates, co-morbid insomnia and sleep apnea was not significantly associated with incident cardiovascular events (hazard ratio 1.38 [0.92, 2.07]). Similar results were observed after excluding daytime impairment from the insomnia definition (DIMS only; Figure 3b). 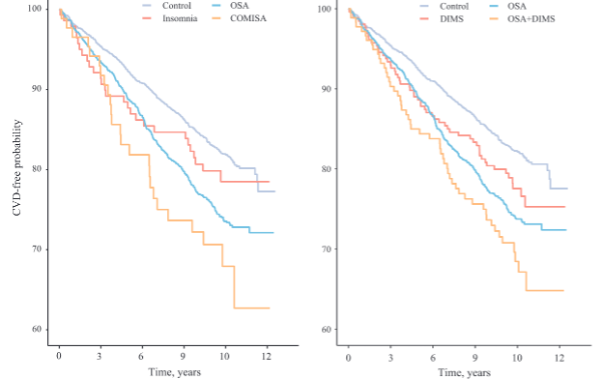 For this analysis, 5236 participants were included (90.2% of 5804) after exclusion of 114 (1.9%), 452 (7.8%) and 2 (< 0.1%) participants due to missing information on nocturnal insomnia symptoms, daytime symptoms, and all-cause mortality, respectively. The median follow-up period for all-cause mortality was ~12, over which there were 1210 deaths. Kaplan-Meier curves are shown in Figure 4 and suggest lower survival probability for the COMISA group. The corresponding hazard ratios, after adjustment for pre-specified covariates, suggested that participant with COMISA were at 47% increased all-cause mortality risk compared to participants with no insomnia/OSA. 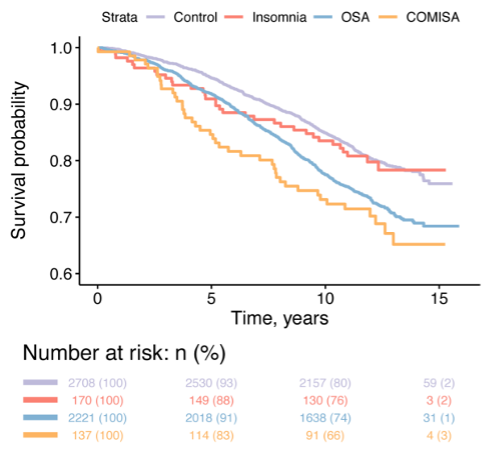 *Table 1: Association between COMISA and all-cause mortality risk for different definitions of insomnia. *

What were the limitations of this work?

Post-hoc analysis of existing large trials is inherently problematic given that the Sleep Heart Health Study was not designed to answer specific questions regarding COMISA and all-cause mortality and incident CV. For example, although both nocturnal and daytime insomnia symptoms were used to classify insomnia (as recommended in diagnostic criteria) and different sensitivity definitions were investigated, insufficient data were available to identify patients with chronic insomnia. Furthermore, insomnia was assessed using sleep questionnaire not specifically designed to assess insomnia symptoms. It would be beneficial to investigate associations between COMISA and health outcomes in a sample specifically designed to do so. In fact, given that sensitivity analyses supported robust associations of acute/chronic insomnia and mortality, it is possible an association between COMISA (and insomnia alone) with mortality may be underestimated compared to insomnia defined according to chronic nocturnal and daytime symptoms.

Associations between COMISA and adverse health outcomes highlight the importance of developing better diagnostic and treatment approaches for this complex and debilitating condition. Continuous Positive Airway Pressure (CPAP) therapy is the recommended treatment for moderate and severe OSA. However, patients with COMISA experience lower CPAP acceptance and long-term use, compared to patients with OSA alone1. This is likely because patients with COMISA spend long periods awake in bed wearing pressurized masks, resulting increased side-effects of CPAP and reduced perceptions of therapeutic benefit. Patients with insomnia may also view CPAP therapy as a ‘threat’ to their sleep, resulting in higher rates of treatment refusal/rejection. Cognitive Behavioral Therapy for Insomnia (CBTi) is the recommended ‘first line’ treatment for insomnia11. CBTi is an effective treatment for insomnia in the presence of untreated mild, moderate and severe OSA12. Initial treatment of insomnia has also been shown to increase subsequent acceptance and nightly use of CPAP therapy by 1-hour per night, largely through increasing rates of initial acceptance of CPAP therapy13. Future studies should investigate the effect of single and combination therapies for COMISA, on physical and mental health outcomes. Identifying underlying mechanisms and phenotypic traits of people with COMISA may guide tailored treatment approaches2.

Assessing for COMISA in the sleep clinic

Many sleep clinics worldwide currently specialize in the diagnosis and management of OSA-alone. Standardized self-report measures of insomnia such as the Insomnia Severity Index14 (7-items), and Sleep Condition Indicator15 (8-items) may be embedded in intake/baseline questionnaires, to identify the 40-50% of OSA patients with co-morbid insomnia symptoms. Such patients are at increased risk of adverse health outcomes, and require unique treatment considerations. Tailored treatments for both conditions result in the best treatment outcomes for people with COMISA (e.g. Cognitive Behavioral Therapy for insomnia, followed by CPAP therapy). CBTi options may include brief nurse/healthcare delivered programs, psychologists with specialized training, and self-guided online or reading programs.

Understanding the mechanisms of COMISA

It is likely that insomnia and OSA share unique bi-directional relationships that result in their frequent co-occurrence and increased morbidity2. For example, insomnia symptoms occur more frequently in people with OSA, compared to people without OSA8. Conversely, OSA is more prevalent among people with insomnia compared to people without insomnia. The high co-morbidity of insomnia and OSA persists after accounting for several symptoms shared by the two conditions (e.g. daytime impairments, frequent awakenings). Clinical trial evidence also suggests bi-directional associations. For example, CPAP therapy improves insomnia symptoms in a sub-sample of patients with COMISA, while RCT evidence also indicates that CBTi reduces OSA severity, vs control16.

To date it has been difficult to identify baseline characteristics that predict which patients show the greatest treatment-response to initial management of OSA, versus insomnia. It is important for future research to investigate bi-directional relationships between COMISA to understand the underlying mechanisms and guide the development and implementation of tailored treatment approaches. 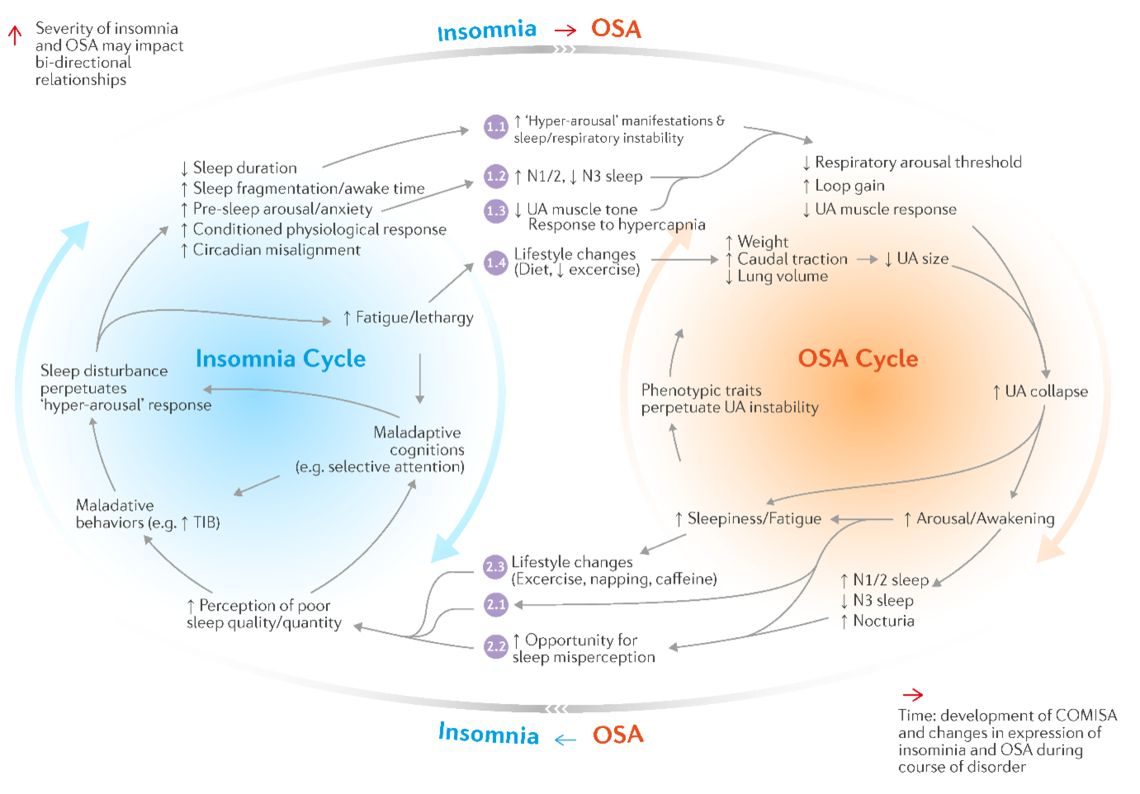 Co-morbid insomnia and sleep apnea (COMISA) is a highly prevalent and debilitating condition. For the first time, these studies have demonstrated an increased risk of mortality in people with COMISA, compared to those with no insomnia/OSA. Research is needed to investigate underlying mechanisms of COMISA and develop more effective and tailored management approaches.