The coupling of slow waves to spindle events has been associated with processes of sleep-dependent memory consolidation. Our objective here was to further characterize distinct subtypes of coupled slow wave/spindle pairs, across different age groups and within various stages of sleep.

We performed event averaging of slow waves identified within overnight electroencephalography (EEG) and created wavelet-based spectrogram images for each subject. We measured the normalized EEG power corresponding to peri-slow wave events using time-frequency windows within the spectrograms. Mixed effects statistical models were used to estimate the relative contribution of each spindle subtype’s unique time-frequency spectral power within the upstates of slow waves in stages N2 and N3 sleep. An additional sequence of signal processing steps step was performed to demonstrate that unique subtypes of slow waves can be identified by their coupling to distinct subtypes of spindles.

Overnight polysomnograms from 582 individuals enrolled in the Cleveland Family Study.

Our analyses demonstrate that the downstates of slow waves are associated with theta burst and slow spindle events, while the upstates of slow waves are associated with two distinct subtypes of spindles. An “early fast” spindle occurs at the beginning of the upstate and is more prominent in stage N2 sleep. In contrast, a “late fast” spindle occurs at the end of the upstate and has greater EEG power during the N3 sleep. Notably, early fast, and late fast spindles overlap in frequency components, although early fast spindles are generally higher in frequency. Aging is associated with a relative shift toward late-fast spindle power during stage N2 sleep, while the amount of late-fast spindle power in stage N3 sleep appears to be relatively stable during the aging process. We also performed a series of event matching and sorting of slow waves and spindles, and our results illustrate that two distinct subtypes of slow waves couple with either early fast or late fast spindles.

The coupling of slow waves with sleep spindles is hypothesized to support sleep-dependent memory consolidation. Changes in the timing of slow wave and spindle coupling have been associated with aging and impaired memory performance. Our study sought to better characterize slow wave coupling by examining the peri-event windows of time surrounding slow waves among 582 subjects ages 6 to 88 years old in the Cleveland Family Study. We performed event detection within EEG sleep recordings to identify slow waves, and subsequently transformed the data into wavelet-based, time-frequency spectrogram images. Within the time-frequency spectrogram windows surrounding slow waves, we observed theta bursts and slow spindles near the slow wave downstates (bottom of the troughs). Within the upstates (positive peaks), we observed two distinct spindles, which we termed “early-fast” and “late-fast” spindles. We further observed that distinct subtypes of slow waves couple with either early-fast or late-fast spindles, and the proportion of each subtype creating the slow wave composite varies between stages N2 and N3 sleep.

With respect to aging, we describe changes in the composition of sleep at every stage of the observed human life cycle. In general, advancing age is associated with a stage N2-specific reduction in the early-fast coupling spindle power, and a shift toward the amount of late-fast coupling power. The amount of N3 stage-associated late-fast spindle power is relatively stable, and thus, advancing age increasingly biases toward a greater amount of late-fast slow wave/spindle events within the composition of slow wave sleep. The results of our study suggest that two different types of slow waves, identifiable by their distinct coupled spindles, may support different types of memory processing within lighter or deeper portions of non-rapid-eye-movement sleep. Our study further indicates that work to develop slow wave/spindle coupling as a functional biomarker would benefit by accounting for the differences in slow wave and spindle subtypes when measuring features of slow wave sleep that may indicate risk of cognitive decline and/or the onset of a neurodegenerative condition such as Alzheimer's disease. 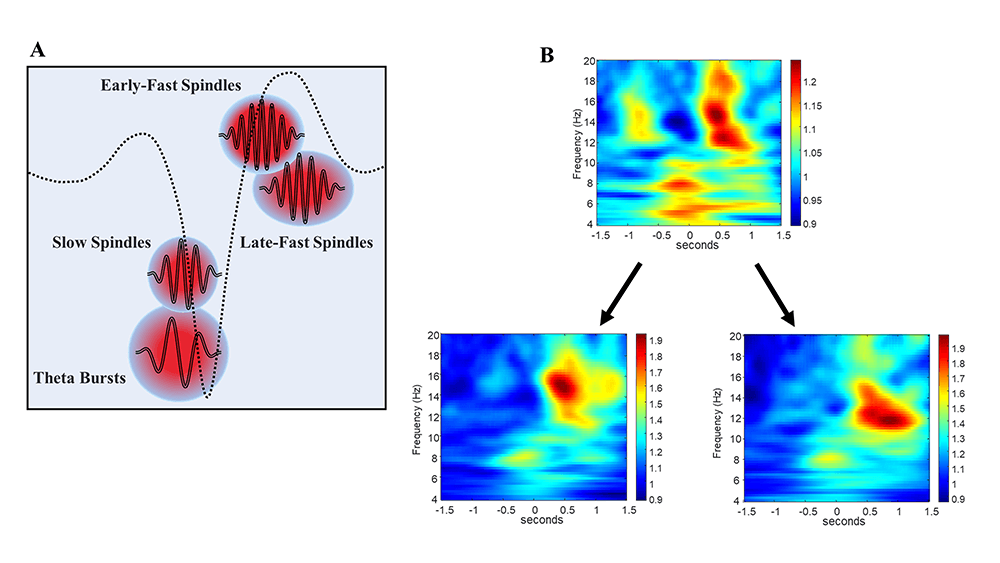 (A) An average waveform depicts the shape of a composite slow wave event. The approximate temporal location of slow wave-coupled events is illustrated as a guide to interpreting time-frequency spectrograms. (B) A time-frequency spectrogram of normalized EEG power demonstrates co-occurrence of theta bursts, slow spindles, early-fast spindles, and late-fast spindles among the averaged time windows of slow wave events. A further example of slow wave separation is provided to illustrated the use of coupled spindles as “identification tags” to sort slow wave subtypes. (Additional examples are available within McConnell et al., 2021).