Lab studies have provided crucial insights on the neurobiological, health, and cognitive impacts of sleep through experiments that vary sleep in a controlled fashion. However, we know less about the causal effect of sleep on ecologically valid outcomes in people’s daily lives. Rao et al. (2021) discuss how field experiments—randomized controlled trials in natural environments—can help us to understand the real-world costs and benefits of sleep using randomized interventions to measure the causal effect of improved sleep in natural environments. Such studies are particularly scarce in low- and middle-income countries, where the vast majority of the global population resides, and where sleep environments are often quite different from those studied in high-income countries. In this post, we discuss data from one such field experiment implemented in a low-income, urban environment in India (Bessone et al, 2021).

We ran a large-scale field experiment (N=452) in Chennai, India that used randomized interventions to increase nighttime sleep as well as to introduce daily naps in an office environment. Using actigraphy, we documented the quantity and efficiency of sleep during the day and at night over the duration of a month, the time that each participant was enrolled in the study. To understand the impact of our interventions on outcomes beyond sleep, we also measured a number of outcomes in participants’ daily lives, including their workplace performance, cognitive function, and health and well-being.

Actigraphy measurements for the 452 individuals in the Urban Poor in India dataset, collected over one month per individual.

First, we documented low levels of sleep duration and efficiency among the urban poor in Chennai. Before we introduced any interventions, participants slept on average just 5.6 hours each night as measured by actigraphs, with an average sleep efficiency of only 70%. Their 8 hours per night of time in bed involved 30 sleep awakenings on average. Interventions to increase sleep were effective in increasing sleep duration but not nighttime sleep efficiency. Providing individuals with sleep devices to improve their home sleep environments (e.g. mattresses, earplugs, eyeshades) as well as feedback regarding their sleep duration and encouragement to sleep more led to an additional 19 minutes of sleep per night on average. Also providing financial incentives to increase sleep – participants were paid Rs. 1 per minute of increased sleep for up to two hours – led to a 29 minute increase of sleep per night. Meanwhile, individuals offered a half-hour nap in an office environment slept for 14 minutes on average, and this amounted to about 8 minutes of additional sleep during each 24-hour period when accounting for changes in nighttime sleep.

Yet, increasing nighttime sleep had no impact on a host of outcomes, including cognitive function (sustained attention, memory, and inhibitory control); workplace performance (time worked, work productivity, earnings); social, time, and risk preferences; and indices of physical health and psychological well-being. In contrast, providing individuals with the opportunity to take a half-hour nap had broadly positive effects on productivity, psychological well-being, and cognition, with the important caveat that naps decreased the time available to work. What were the conclusions and implications of the work?

Before these study results were released we surveyed 119 experts from sleep science and economics. They predicted a 7% increase in hours worked and a 12% increase in work output as a result of our Night Sleep interventions. Instead, the results tell a different story; in particular, we see that once people spend more time in bed at night, they then also spend less time working in the office during the day, which leads to a decrease in the total hours worked. As such, the results of this experiment highlight the importance of running experiments in real-world environments including the home, office, and school to understand the role of sleep beyond the lab. It also highlights the value of studying sleep in low- and middle-income countries, where existing levels of sleep duration and quality might be much worse than in high-income countries.

One possible explanation for the surprising finding of no benefits of increased night sleep duration was the low efficiency of the sleep. Increasing sleep duration, even from the low levels observed in this study, might not unlock the benefits of sleep if sleep quality is not also improved. Future work should examine how to improve sleep quality in low-income settings around the world.

The dataset Urban Poor in India comes from a randomized controlled trial run among low-income adults in Chennai, India. The experiment aims to understand the causal impact of sleep on workplace performance, cognitive function, and health and well-being. We measure sleep using actigraphy over the course of the month that each of 452 participants are enrolled in our experiment. Our first finding is that sleep is quite poor at baseline. As shown in Figure 1, while individuals spend 8 hours in bed on average at night, they spend only 5.6 hours asleep. In fact, 71% of participants sleep less than 6 hours per night. Their self-reported sleep does not capture this observed discrepancy. We also document low sleep efficiency, which is just 69% at baseline. 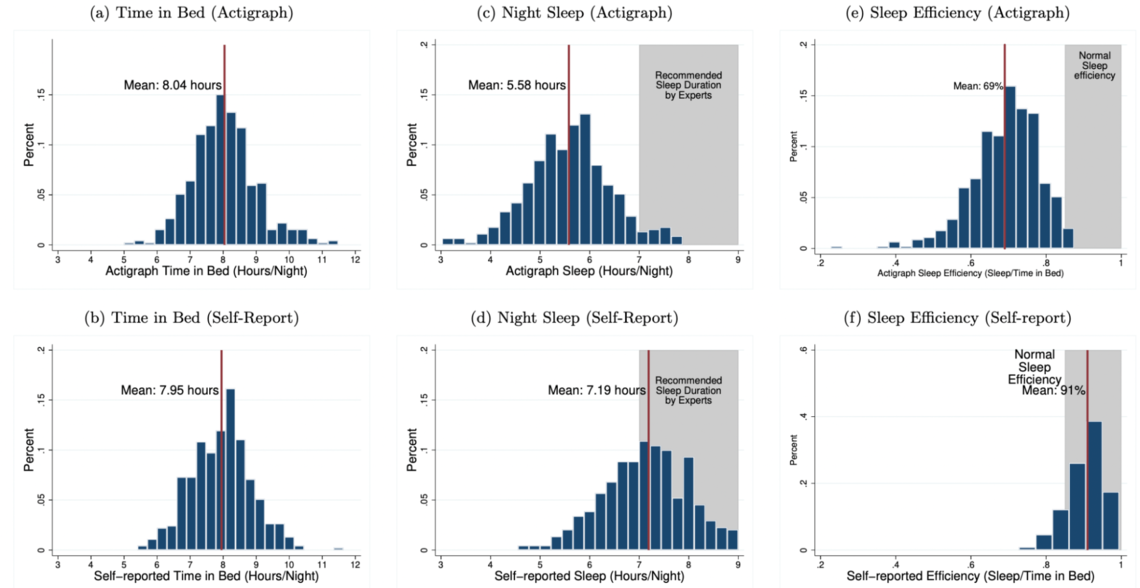 In the experiment individuals were cross-randomized to one of two Night Sleep interventions and a Nap intervention. One of the Night Sleep interventions involved providing individuals with sleep devices such as a mattress, earplugs, or eyeshades along with information and encouragement regarding the benefits of sleep. The second intervention additionally included financial incentives that participants received for increasing the amount they slept. Meanwhile, those assigned to the Nap intervention had the opportunity to take a half-hour nap in an office environment. As shown in Figure 2, we find that the Night Sleep interventions increased sleep duration by 27 minutes per night on average and increased the time spent in bed by 38 minutes, although sleep efficiency did not change when the treatments were introduced. Individuals slept for 14 minutes on average during the half-hour nap period, and sleep efficiency during naps was higher than during sleep at night. 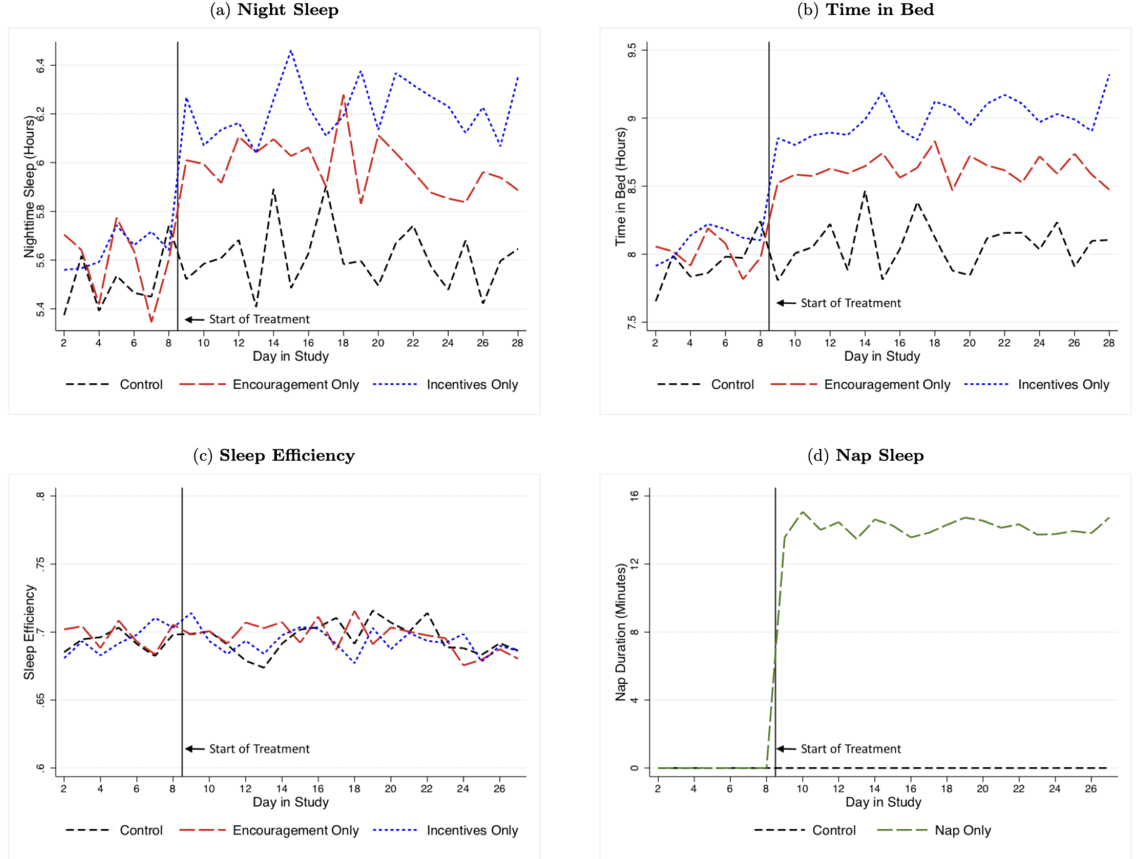 Finally, we measured the impact of increased sleep on outcomes related to workplace performance, cognitive function, and health and well-being. As shown in Figure 3, we saw no impacts of the Night Sleep intervention across our range of outcomes, while we saw positive effects of the Nap intervention, although naps did decrease the overall time people spent working in the office. For a detailed discussion of these results, see Bessone et al (2021). 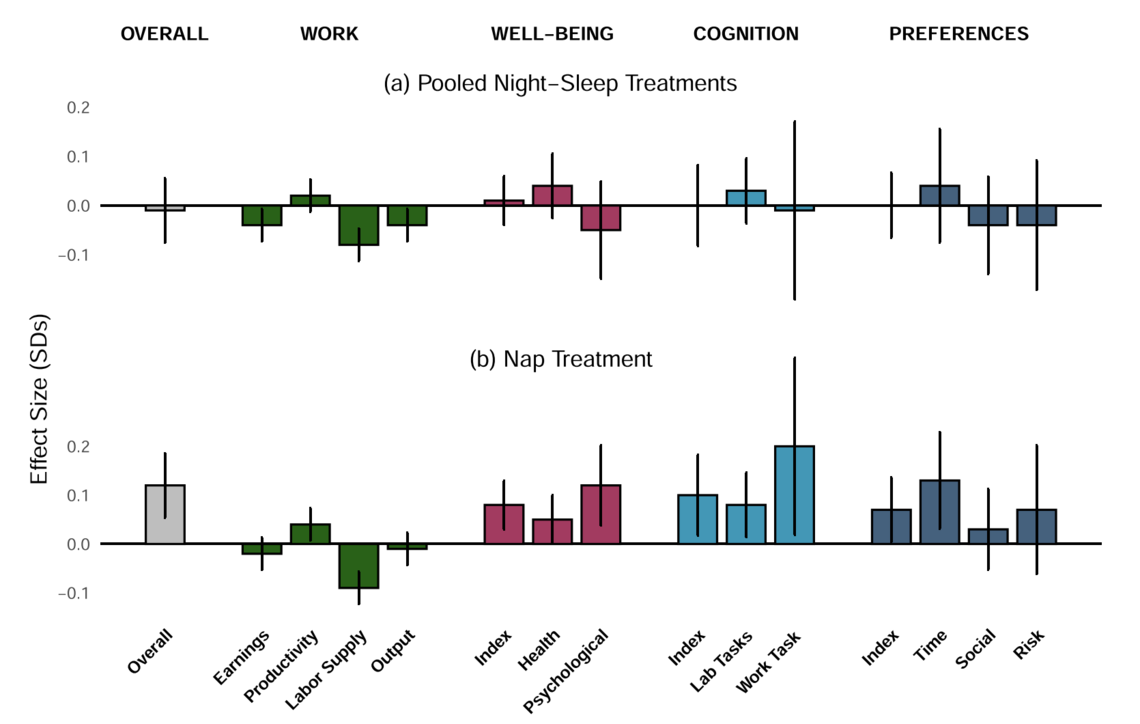 Our results point to the value of running experiments in people’s natural environments to understand the barriers to sleep as well as the costs and benefits of increased sleep in different settings. With this in mind, Rao et al (2021) highlight a number of high-priority, policy-relevant open questions for future field research on sleep.